Fr Paul’s Reflection on the Gospel for Easter 3. 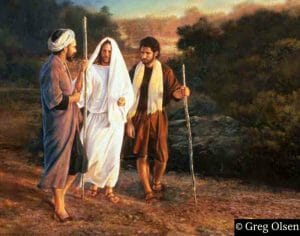 While I was working in Redding, California, I came to hear a true story about a church congregation on the Mexico border that was baptizing a whole family in a local river that ran not far from an Hispanic church. Almost like a scene from the early Church, as the newly baptized members came up out of the river they were handed their baptismal certificates by the priest. Afterwards, in true Latino fashion, they celebrated a great and splendid fiesta. Since the whole event occurred outdoors, the baptismal ritual and celebration were open for all to see -including a couple of men recently arrived illegally over the border from Mexico. The next day these men showed up at the church asking if this was the church where they “fixed immigration papers.” The men naïvely mistook the baptismal certificates for official government papers that would legalize their status in the USA.  In short, they thought that the people getting baptized were receiving green cards. Wow, I thought, if only it had been that easy when we applied for our Green cards!

The gospel stories read in the church during the 50 days between Easter and Pentecost also deal with similar cases of mis-recognition. At the empty tomb, Mary Magdalene mistakes Jesus for the gardener. While on a fishing trip, Peter and the rest of the disciples see a man walking by the shore of the Lake, but do not immediately know that it is Jesus. Most famously, our Gospel last Sunday recounted the story of Thomas who refuses to believe until he sees and touches the wounds of Jesus.  All in all the 50 days of Easter make us reflect on both the possibility and difficulties of knowing Jesus.

The story set in Luke 24 for today, the walk to Emmaus is no different. The story is well known, yet what most strikes me in this passage is the use of the Greek word paroikos, which can be variously translated as stranger, exile or alien. On the walk to Emmaus, Jesus is first recognized as an alien.

I have come to see “Alien” as an ugly word, and as used today in many countries it has very strong negative overtones. It means not only that are you an unknown (a stranger) but that you are different and hence do not really belong. When we read stories of people who had walked across a desert or risked all in a flimsy boat across the English Channel to enter a new and safe country, government systems refer to such people  as “illegal aliens” – a term that sounds very harsh and uncaring, especially when many people flee their own country for safety and freedom.

On the way to Emmaus those sad, deflated disciples mistook their Lord for an alien. How did they make such a mistake? Was it because he appeared to be ignorant of current events and so betrayed himself as an outsider? Was it that Jesus’ Galilean accent betrayed him as Peter’s did in the courtyard? Who knows?

Now, of course, we know that mis-recognition is essential to the structure of the resurrection story; the playful game of “hide and seek” the Lord plays with his disciples is not accidental but has meaning. Christians will not find their Lord until and where he wishes to be found. But is the form in which he’s found irrelevant? Is it completely by accident that Jesus is mistaken for an alien? The great German reformer Martin Luther would say that Jesus reveals himself by hiding himself under contrary appearance. What perhaps shocks us is that the risen Lord, the maker of heaven and earth, comes to his disciples as an alien!

Peter and the early Christian community believed that the church was a paroikia (the root behind the words “parish” and “parochial”), a community of aliens gathered to commemorate the death of one who died outside the gate, one who died as an illegal. This is not simply a ghetto of resident aliens, but an assembly of illegal aliens, meaning people who literally have no citizenship here because, as Paul says, “Our citizenship is in heaven” (Phil. 3:20). In other words, Jesus’ alien form does not vanish – it is assumed by the church.

So perhaps “alien” is not such an ugly word after all. Perhaps those two Mexican men in California saw more clearly than most of us what the church really is all about. Maybe if I walked with some illegal aliens for awhile, listened to what they have to say and invited them to stay, my eyes too might be opened and I too might confess: The Lord has risen indeed! 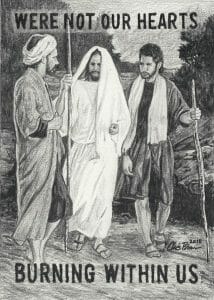