A Reflection for Good Friday 2020 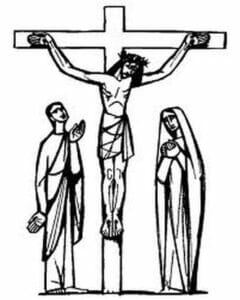 ‘And they crucified him, and divided their clothes among them, casting lots to decide what each should take.’

When I served in the Diocese of Edinburgh from 1998 – 2002 I was very fortunate to work alongside Bishop Richard Holloway. Bishop Richard is a much published author and teacher, a Bishop that cleverly used the media for the bold message of the radical Gospel of Jesus Christ. On one occasion I recall Bishop Richard telling me that every year around this time, he would force himself to read a book on the Holocaust. This was far from comfortable, but it fit well with his thoughts in Passiontide.  There has always been a nagging question both for Jews and Christians, why does God allow suffering?

Clearly from what we now know about the Nazi concentration camps, their purpose was to extract every last thing from the Jews, Gypsies and homosexuals who had been rounded up to imprisoned within them.  One image that sticks in my mind after a visit to Yad Vashem holocaust museum in Israel was of piles of glasses, spectacles – removed from the prisoners – 1940s style round lensed glasses that there owners would no longer need. Gold teeth were extracted: prisoners would no longer need the precious metal. Civilian clothes were removed and the camp uniform replaced it. Every last ounce of energy was then drained from those still young and fit enough to work…but little energy was offered to replace that which and been expended. The stark evidence of starvation and weakness led to illness and even greater weakness, total inability to work – so naturally death followed quickly. Not even a bullet had to be wasted on dispatching these prisoners: their very breath was taken from them as they chocked in the gas chambers.

At the foot of the cross on that first Good Friday, nothing was to be wasted either.  The Roman soldiers would cast lots for his garments – though why anyone would want them, bloodied as they were escapes me? Were they really of such great value?

Back in the Roman barracks there had been no easy pickings: the man Jesus according to the New Testament famously carried no money, no purse, no staff. All he had was the very shirt on his back – but now, they even had his short off his back – and his back did not bear looking at after the extreme flogging.

So as we read the Passion story, this is how it all ends. A naked man on the cross and strangers scattering any last memory of him, any last memento of his. Perhaps their thought is that he will be forgotten. This made me think of just how many families have left a hospital after the death of a loved one with only a pathetic plastic bag of belongings to remove from the ward…it seems so little to come away with when someone has died. It begs the question is this it for a whole life lived?

It would seem that Our Lord Jesus would not be alone in having next to nothing to his name at the end of his life. We are unusual in leaving wardrobes of clothes to be taken to charity shops, nick-nacks, unsellable electrical goods, outdated soft furnishings. Now, it can take weeks to ‘clear a house’, to sort through papers, empty kitchen cupboards and the like. Things, all just stuff really when all is said and done.  There are so many arguments and hurts given and borne by families dividing what is left.

With Jesus it all seems very different. He leaves nothing to touch, nothing to venerate despite the medieval church and its crazy obsession with holy relics. What is left for us is simply the story – a story that tells us of how he died, a story that remembers every detail of what happened, a story that people saw with their own eyes, how they perhaps remembered because it was so unusual, so striking and in some ways so magnificent. This is what faith, and trust in God looks like. Here we are shown brave and determined loving obedience to a loving Father’s will and plan. This is where even the crucified thief can find his only hope, and the disciples begin to see a new community built on accepting and forgiving the very worst that is within us as human beings, and yet trying hard to emulate the very best of human existence.

They divided his clothes amongst them. So dear people of Holy Trinity Church in Ramsgate, on this Good Friday, what will we take from this day. Please remember this if nothing else, Jesus on this dark day leaves us absolutely nothing that is not totally ‘Good’.

Almighty Father look with mercy on this your family for which our Lord Jesus Christ was content to be betrayed and given up into the hands of wicked men and to suffer death upon the cross; Lord we thank you for all the benefits you have won for us. For all the pains and insults which you have borne for us. Most merciful Redeemer, Friend and Brother, may we by learning of the manner of your life learn to follow in your steps of humility and sacrifice.

Lord Jesus Christ, take me along that holy way you once took to your death. Take my mind, my memory, above all my reluctant heart, and let me see what once you did for love of me and all the world. Amen