Reflection for the Sunday after Easter. 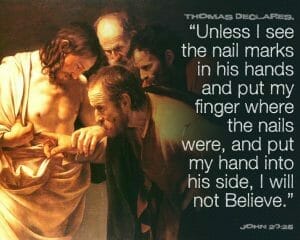 Some years ago, I was privileged to share a funeral service in my church in Schenectady, New York with a local Rabbi, the Rabbi snag and played the guitar at this funeral service, and he did it very well indeed.  This got me thinking about our theological differences and what it meant to be Jewish or Christian. I realized that despite having the same biblical roots, our understanding of the Sabbath day and its observance was quite different.

My Churchwarden at the time, having attended the funeral made some joke that as the Rabbi was such a good singer and guitarist, he asked the Rabbi what he was doing on Sunday.  The inference being he would be free to help us and sing with his guitar, having of course done his worship on Saturday. The Ten Commandments clearly state   “Remember the Sabbath day, and keep it holy” (Exodus 20:8)?  Perhaps the gospel readings of the Sundays after Easter give us the answer.

The gospel writers were not particularly interested in telling us the precise day of the week in which many of the events they recorded took place. With one exception. In the public ministry of Jesus, they often told us that many of the healing miracles of Jesus took place on the Sabbath day. And this got Jesus into a lot of trouble with the religious leaders of his day. But as soon as Jesus dies and rises from the dead, we do not hear about the Sabbath anymore. Instead we begin to hear about the first day of the week which of course is Sunday.

This is how the early believers came to recognize Sunday as the dies Dominica, “the day of the Lord” (Revelation 1:10). After the Lord’s ascension into heaven, the disciples continued to gather together in worship on Sundays, in expectation that the Lord Jesus would come to be in their midst and share fellowship with them as he had promised.

In the gospel set for today we read about the appearance of the risen Lord in the assembly of the apostles on the day of resurrection and a second appearance a week later. The second appearance focuses on Thomas who was not present with the rest of the apostles when Jesus appeared among them. Where could he have gone? We do not know exactly but as soon as he comes back the other disciples tell him that they have seen the Lord. Could it be that when they heard that Jesus had risen from the dead, that he, Thomas, went out on his own to seek him out? Perhaps he went to the houses of Jesus’ friends, to the house of Lazarus, Martha and Mary in Bethany, or to the village where they ate the last supper. He was seeking Jesus alone while Jesus was with the assembly of his followers. Could that be the evangelist’s way of telling the reader that encounter with the risen Lord is something that happens not so much in the privacy of the individual’s religious initiative and practice as much as in fellowship with the community of believers?

I am certainly hearing from so many people just now how they are missing the fellowship of the community of believers in our regular Sunday worship duri g this lock down due to Covid-19.

So, the following Sunday, Thomas is there fellowshipping with the rest of the community. Jesus appears as usual and Thomas experiences the desire of his heart and exclaims, “My Lord and my God (v. 28).” Next time around he would not lightly absent himself from the community Sunday assembly.

Do we have to look far to see such Thomases in our society today, men and women who deep down in their hearts seek the risen Lord, but who seek him outside the worshipping and believing community? They try to draw near to God by engaging in all sorts of self-imposed personal devotional exercises. Religion, they say, is personal, and they are right. But religion is also communitarian, and this they need to learn just as Thomas did. I think that it is a lesson we are all learning the hard way just now. So many people have asked for a huge celebratory Mass and party when we are finally allowed to return to Church again. We need the fellowship of each other to know the Risen Jesus in our midst. 2020 is teaching us this with force.

May the story of Thomas help us all to appreciate with a fresh importance the important role of the church and the sacraments in our spiritual journey to meet the risen Lord together as a pilgrim people.