Home » The May Devotion

Had we been in Church last Sunday – May 3rd we would have been enjoying the May Devotion to Blessed Mary, Mother of Jesus. Each year this has been a very special event in Holy Trinity Church, especially for our children. 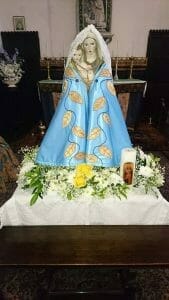 As we could not celebrate this year in the traditional manner, here is a little history of the May Devotion.

May is Mary’s month, but why?

The practice of dedicating the month of May to our Lady was popularized especially by the Rosary Encyclicals of Pope Leo XIII – beginning in 1883 and concluding in 1889, the Pope wrote twelve encyclicals and five apostolic letters on the Rosary.

“The May devotion [to our Lady] in its present form originated at Rome where Father Latomia of the Roman College of the Society of Jesus, to counteract infidelity and immorality among the students, made a vow at the end of the eighteenth century to devote the month of May to Mary. From Rome the practice spread to the other Jesuit colleges and thence to nearly every Catholic church of the Latin rite. It is one of the oldest forms of a devotion extending over an entire month.”

Today many Roman Catholics and Catholic Anglicans know that May is dedicated to the Mother of God, but it may be a bit of a puzzle as to why May was chosen for this special honor. What is it about May that makes it suited to be the Month of Mary?

Mary Month – Why May?
Some have pointed to the fact that, in classic western culture (both Greek and Roman), May was recognized as the season of the beginning of new life. In the Greek world, May was dedicated to the goddess Artemis and associated with fecundity. Roman culture linked the month of May to Flora, the goddess of bloom and blossoms – this led to the custom of ludi florales (or floral games) which took place at the very end of April as a preparation for entering into the month of May.

It seems that this ancient tradition of connecting May with new life and fecundity, led to a realization that May is very much the month of motherhood – this may be the reason why Mother’s Day is celebrated during May not only in the United States but in many countries and cultures of both the East and the West.

In the month of May, the winter comes to an end and the spring season begins (this was the official beginning of spring in Roman culture). This new beginning and new birth is a testimony to the motherhood of Mother Earth. 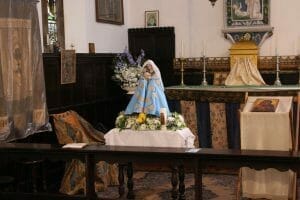 The connection between motherhood and May led Christians eventually to adopt May as Mary’s Month. May is the Month of Our Lady precisely as the Mother of God. So wrote the priest-poet Fr. Gerard Manley Hopkins, in his marian classic “May Magnificat.”

MAY is Mary’s month, and I
Muse at that and wonder why:
Her feasts follow reason,
Dated due to season—

Candlemas, Lady Day;
But the Lady Month, May,
Why fasten that upon her,
With a feasting in her honour?

Is it only its being brighter
Than the most are must delight her?
Is it opportunest
And flowers finds soonest?

Ask of her, the mighty mother:
Her reply puts this other
Question: What is Spring?—
Growth in every thing—

Flesh and fleece, fur and feather,
Grass and greenworld all together;
Star-eyed strawberry-breasted
Throstle above her nested

Cluster of bugle blue eggs thin
Forms and warms the life within;
And bird and blossom swell
In sod or sheath or shell.

All things rising, all things sizing
Mary sees, sympathising
With that world of good,
Nature’s motherhood.

Their magnifying of each its kind
With delight calls to mind
How she did in her stored
Magnify the Lord.

Well but there was more than this:
Spring’s universal bliss
Much, had much to say
To offering Mary May.

And azuring-over greybell makes
Wood banks and brakes wash wet like lakes
And magic cuckoocall
Caps, clears, and clinches all—

This ecstasy all through mothering earth
Tells Mary her mirth till Christ’s birth
To remember and exultation
In God who was her salvation.